Los Angeles City College journalism major is simply fed up with life, and the hardships that life can bring. Twenty-two-year old Los Angeles native Derek Anthony Lesnau grew up for the most part with parents who were lenient. He is the second oldest of four children. At the age of five, Derek’s parents ended their short marriage in divorce, which forced Derek to choose between living with either his mother or father.

“Their divorce wasn’t that big of a deal to me, and it was not hard for me to choose who I wanted to live with,” Derek said.

When it came down to it, Derek at first decided to live with his mother. Several years after Derek’s mom divorced his father, she sadly turned to alcohol to soothe the stress of being a single parent. Derek could not stand to see his mother going down the path of alcoholism, so he eventually moved in with his father for a short period of time. 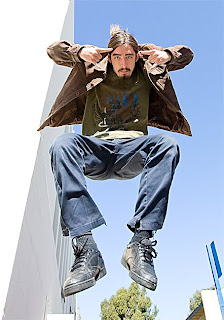 be called a slacker during his high school years. He spent most of the school week at the home of a friend who lived with an uncle. They passed the time playing “Death Metal” music.

“We had a blast just smoking pot, and jamming,” Derek said. “I was in three different bands, so that was cool,” Derek reminisced.

Not only did Derek play guitar, but bass and drums as well. Derek could have easily taken on the title of a well-rounded student had he put forth the effort. Derek was also into comic books, and martial arts. He began doing Judo and has acquired a brown belt since he started the sport in 2005. His endless talents all seemed to go to waste because he wasn’t focused.Consequently Derek didn’t walk the stage in 2004 with his graduating class at John Marshall High.

While his peers were going off to college and starting new ventures after graduation, he was stuck at a dead end job.

“I was getting paid to do something I didn’t like doing,” Derek said.

After working at Beverly Taxi for a year Derek was fired, and had lost his only source of income. He was at a point in his life where he absolutely didn’t want to be.

“I lost my job, I had no income, I was starving,” Derek said, as he broke eye contact. “ I desperately want a change,” He continued on. “We are crammed eight people in one apartment, I’m so disgusted every time I’m there,” Derek said.

One day almost out of nowhere a light went off in Derek’s head. He realized that he had to do something about his situation. He decided to enroll himself at LACC to further his education in journalism. He’s also in the process of getting his GED. Derek is certainly on the path of reconstructing his life.

“I just want to be comfortable,” Derek said firmly.

After speaking with Derek I realized that with determination, drive, and passion for your work, anything is possible.
Posted by Hip Hop Swagga at 10:36 AM