Amber Rose Too Much or Just Enough ?

I don't know many people that wouldn't argue to the fact that Amber Rose is one of the hottest models in the game at this point and time, but is she going too far? Some are wondering what she's really good for. Not saying that the gal doesn't have talent. LOL we just have yet to see it, right? Now everybody knows that sex sells. Pussy and cigarettes are the top two sellers in America (thats a joke for the late bloomers you can laugh now) so why not go with the sex approach?
Im wondering when women will begin to bring their business minds to the table. The Hip Hop world is dominated by men , and has been that way since the beginning. Women have come and gone for their coke bottle bodies, fat ass's , and cute faces,but none of them have really been in the game for the long hall. And NO ! Super Head does not count. I think that child has issue's. But thats a whole other conversation for a later day. I like the idea of being sexy , and sexual even, but sometimes my dear there has to be a point where you say, Ok maybe this is a bit much. In the radio interview below she talks about how much she likes to eat pussy. Im just sayin keep that part tween the sheets ; ) .

So what do the men like? Is this what a guy would conscider wifey material? Omarion was quoted in a blog on missjia.com “No disrespect, but no Amber Rose for me. Everybody has their past – and don’t get me wrong, I’m not judgemental at all – but I do like a certain amount of class", Said Omarion. There is a huge difference between trashy , and classy im just not sure if "video vixens" these days can distiguish between the two. Im not saying Amber is wrong for what she's doing. In fact I applaud her. Get that money ! Im just wondering though how good images like this is for teens and preteens. What are we teaching our young black women ? Are we saying that the only way to be successful is if you go this route? Exposure of these types of things can really put lots of peer pressure on young girls and boys alike.

What do you guys think? 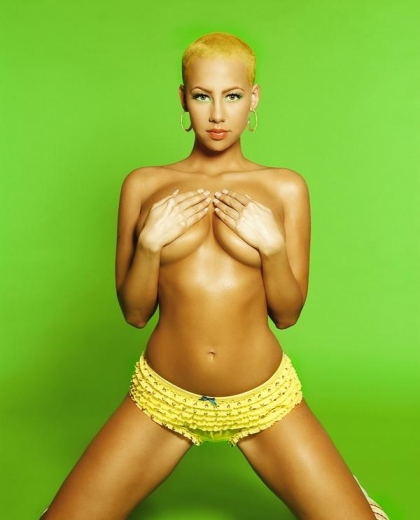