Drake Before He Had Money To Blow

After seeing some old videos of Drake or should I say Aubrey Graham, I was a bit confused.Aubrey was on born October 24th, 1986, in Toronto, Ontario Canada. About eight or nine years ago he was mostly known as Jimmy Brooks from Degrassi-The Next Generation.  Which Debuted on October 14th, 2001 on Canada's CTV network,  a weekly show,that lasted about  half-hour Degrassi" The Next Generation was the long awaited spinoff of the extremely enormously popular and sometimes controversial teen-oriented drama series of the 1980s and the early 1990s.

Degrassi Junior High and Degrassi High (both of which, in turn, had evolved from 1979's The Kids of Degrassi Street. As in the prior shows, the drama took place in a modern urban Canadian High School. In 2001, Aubrey (Drake) Graham began his acting career, playing the famous role of Jimmy Brook. In the show, Brooks is a basketball star who became physically disabled after he was shot by a classmate. His role on the show ended in 2009. Drake is seen in the middle in the wheel chair with the rest of the Degrassi cast.

This guy has women from all over going crazy. He shuts down malls.Lol which apparently he's been doing for quite some time now. But before all that he was just an average kid growing up in Canada with a dream to be something big.Drake was inspired to become an actor because of Denzel Washington.In the past Aubrey has done some commercial work for GMC, Sears, M.A.C. and Toys'R'Us. Aubrey has also trained with young Peoples Theatre and the Showtime summer workshop.
This is some early footage of "Drake" before the Money, Clothes , and Getting it in. Money and Clo -o-o-Oes lol . I like that song, but drake when did you get sooo suave ? 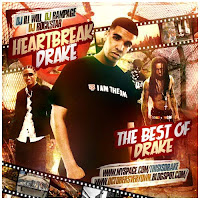 In February of  2006, Drake released his first mixtape , Called "Room for Improvement". It was made available through his website and his official MySpace page. From the success of his first mixtape, Drake later began releasing more, music. In 2007, he released "Comeback Season" which got him alot of  attention and praise. From that he produced a single and a music video for Replacement Girl featuring Trey Songz. It also contained a freestyle over a song with Lil Wayne, a remix of the already popular song "Man of the Year" originally by Brisco and Flo-Rida. Also in 2007, Drake became the first unsigned Canadian rapper to have his music video featured on BET when his first single, "Replacement Girl" was featured as the "New Joint of the Day" on April 30, 2007.In 2008, Lil Wayne was given some of Drake's music from Rap-A-Lot founder, J. Prince's son and he called Drake immediately to fly to
Houston to come and tour with him. Drake and
Wayne had recorded a couple of songs during
the time including, 'Ransom 'I Want This Forever'
and the remix to Drake's song, 'Brand New'.
Although after becoming apart of Lil Wayne's crew,
Young Money, Drake was still not signed.He achieved
success before signing to a major record label, according
to his management. Drake continued to work very close
with close with Lil Wayne,and Young Money Entertainment,
before officially signing with the record label in June of 2009.
His first studio album, "Thank Me Later",is expected to be released on the label sometime in 2010. "I really don't bank on collaborations unless it makes sense ... it's about continuing with the vibe that I have and being honest," Drake told "MTV". His upcoming album will have some collabs. But if it doesn't mesh right , he's willing to do it all by himself.