Im sick and tired of people making excuses for UGLY people. Its crazy that people still go around saying beauty is only skin deep, and dont judge a book by its cover. When almost everybody is guilty of doing so. Let me take a moment to pause and make it very clear that Im not shallow nor do I base a persons worth on their outter shell. In this post I am simply saying that in my opinion,these people are UGLY. I wouldn't seek to mate with any of them for any reason or any amount of money. You know how some people say that money makes you look better? Soooooooo untrue ! In this case none of these people's money make them look any better. Here are my Top 5 most UGLY Celebrities. 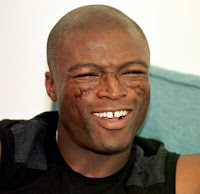 Victim # 1- Seal , I dont even know where to start with this guy. I dont know the story of how is face got this way, so im not gone go too hard on him. His teeth could use some dental work , and with all the money he has I would think that he would get some braces to fix that problem at least. If you are that UGLY you want to do all corrections that may help your appearance. Seal could NOT get it ! That white girl he married is on that big MANDINGO ! Lol that's her best friend. She married Seals "Big Willie".

The picture to your left is meant to be art. I mean could you imagine this sneaking up on you in the middle of the night? I dont care how old you are, this picture alone will make a person piss in their pants. If I see somethin Lurking in the night like this Im runnin out the house. Nothin you can tell me thats gonna make me believe that this picture is supposed to be art. Simply SCARY ! 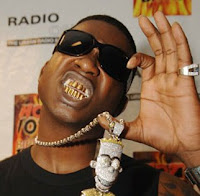 Victim # 2- Gucci Mane, There is nothin you can pay me that will make me wanna get close to him in any kind of way. Im wondering if Gucci got the memo that people don't do Gold's in their mouth anymore.Real Ballers have graduated to Platinum sweety. And those lips ! Its obvious that he smokes major, weed , tweeds,sticks,stems,and everything else. His lips look hard,and crusty. I wouldn't be surprised if his lips permanently smell like ass, cheese, swisher sweets, and black'n milds all mixed together lol.

All I wanna know on this one is , who allowed him to use this picture as an album cover ? Who decided this picture was a good way to market him. Lol wow ! I cant take anymore on to the next one.

Victime #3-, Tyrone Hill of the Miami Heat ! First off let me start off by telling you that  his nickname is Skeletor. Lmao thats pretty fucked up, but Oh so true. This nigga looks just like a damn skeleton. Im not sure if this guy has a wife or kids, but because he's a NBA star im sure he does. Money will get you just about anything except for a date with me. Lol. his face looks like its sagging. His face looks like it was made of clay or somethin. Like Silly Putty. If you pull it, it will stretch and slowly go back to it's original form.

He looks like one of those Zombie's from Resident Evil. Have any of yall ever played that game? Im talkin about the Original one on PS1. Lmao back in the day. Im sure he didnt get much pussy in High School. 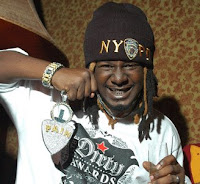 Victim # 4-T.Paine, These are another pair of lips I plan on stayin far away from. And the fact that he believes that he belongs to a circus doesn't make the situation any better. I would be ok if I didnt see this face for a while. UGLY !

Victim #5- Mr. UGLY ??? Will be choosen by my lovely readers. I want you guys to come up with the ugliest celebrity man that you can think of to put in our # 5 spot. Who would you like to see? Choose wisely and remember it must be a guy. Once all the ballots are in I will choose the ugliest or the person who has the most nominations for Mr. UGLY.