Ever wonder what a Real Black King Looks Like? Praise Haile Selassie
King of Kings, Lord of Lords Conquering Lion of the tribe of Judah.

Haile Selassie was born Tafari Makonnen in Ethiopia in 1892. He married Wayzaro Menen in 1911, daughter of Emperor Menelik II. By becoming prince (Ras), Tafari became the focus of the Christian majority's approval over Menelik's grandson, Lij Yasu, because of his progressive nature and the latter's unreliable politics. He was named regent and heir to the throne in 1917, but had to wait until the death of the Empress Zauditu to assume full kingship. During the years of 1917-1928, Tafari traveled to such cities as Rome, Paris, and London to become the first Ethiopian ruler to ever go abroad. In November of 1930, Zaubitu died and Tafari was crowned emperor, the 111th emperor in the succession of King Solomon. Upon this occasion he took the name Haile Selassie, meaning "Might of the Trinity."


Ethiopia was a culturally and resourcefully rich land recognized by the European colonial powers as sovereign from as early as 1900. Selassie's predecessor expanded his empire successfully in the 1880's and formed treaties with the Italians, who recognized the imperial potential of northern Africa. Relations became strained, however, in the 1890's when Britain and Italy agreed that Ethiopia should fall under Italian influence. Despite occasional conflicts, Ethiopia under Menelik remained sovereign, and thus we see a stage set for the leadership of Selassie: a free Ethiopia with Italian, British, and French colonies nearby, and an Italian will to expand its territorial claims when its power and opportunity arise.

Before Selassie's crowning as negus (King), he began modernizing Ethiopia to rival . He improved legislation, bureaucracy, government schooling, and health and social services in preparation for his new reign. In 1919 Ethiopia applied for membership into the League of Nations but was banned because its practice of slavery was still strong. By 1923, working with the Empress Zauditu, the slave trade was abolished and Ethiopia was unanimously accepted into the League. He further acted to seek approval of other nations by emancipating existing slaves and their children and created government bureaus to do so.

In 1931, upon assuming power, Selassie established the first Ethiopian constitution, which aimed to re-focus governmental power from many rases to his blood line solely. This move was effective in aiding Ethiopia's modernization through bureaucracy and solidarity, and forced the many regional rases to either oppose him treasonably or join him with their support. By 1934, after several suppressed revolts, all the major rases were either supporters or outside the empires influence in the outer regions of Ethiopia.The Bank of Ethiopia was also founded in 1931 and introduced Ethiopian currency. 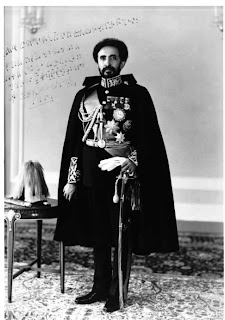 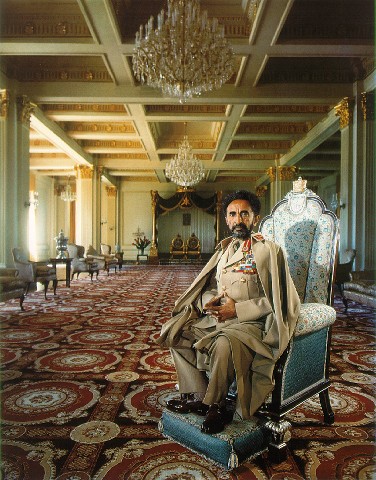 Though the changes in Ethiopia by Selassie and his new progressive government seemed very promising, there lingered a new threat to the growing country when Benito Mussolini came to power in Italy in 1922. The north African colony of Eritrea, held by the Italians, was harmonious in its African/Italian co-existence from the 1890's until 1922, when Mussolini's administration began to emphasize the superiority of Italian inhabitants, and even enforced the segregation of the population. As late as 1928, motions of peace were made by Italy, but it seemed as though Mussolini wanted only as a strategic base for future conquest in Africa.

In December 1934, there was an incident seemingly provoked by Italian forces which involved an Ethiopian escort to the Welwel wells used by desert nomads. The League of Nations exonerated both parties in the battle in September 1935, and it seemed to Mussolini that he would not be condemned for his future hostilities. Italy invaded Ethiopia one month later without declaring war; the League of Nations condemned Italy as the aggressor, but no actions were taken. The fighting persisted for seven months, and Ethiopia was pushed back quite forcefully. Selassie found his forces unmatched militarily and was shocked at the use of chemical weapons by Italy, and the lack of action taken by the League of Nations. Haile Selassie was forced to exile on May 2 of 1936, a move which raised harsh criticism from many who were used to a warrior emperor of Ethiopia. On June 30, Haile Selassie went to Geneva to seek help from the League of Nations. He made a powerful speech in which he addressed the lack of enforcement of the Italian arms embargo, and quite effectively illustrated the consequences of the League's stifled actions: either there would exist collective security or international lawlessness.His speech was taken quite emotionally by audiences around the world, especially in America, where he achieved much sympathy. Selassie succeeded in raising the support of the United States and Russia, at least verbally, but Britain and France still recognized the Italian possession of Ethiopia by Italy.

While Selassie was in exile, the Italian forces established new government and attempted to crush the continuing revolts by massacres and segregation. In Britain for most of his exile, he attempted to raise public support for the plight of his country, but gained little attention until Italy entered the war on the side of Germany in June 1940. After the entrance, Britain and Selassie worked together to rally the remaining revolutionary forces in Ethiopia. He proceeded to Khartoum in 1940 to be in closer contact with his troops and British coordinators. With an army of British, South African, African, and Ethiopian soldiers, Haile Selassie re-entered Addis Ababa on May 5, 1941, but fighting continued on Ethiopian soil until January 1942. During the years of war, Selassie controlled internal affairs, but with required British approval. Upon his return he, without consulting Britain, appointed a seven member cabinet and a governor of Addis Ababa. His stubbornness and foresight to retaining power showed Selassie to be a determined dictator, but certainly not without Ethiopia's benefit in mind. The modernization's made by Britain concerning currency, industrialization, and bureaucracy made Selassie see the major importance in modernizing in order to survive. He attempted to secure Ethiopia, but the British denied his wishes. 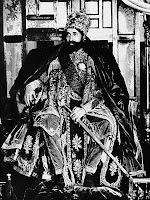 After this, Selassie tried to calm his opponents mostly through land grants to officials, but with little social or political reform. The years prior to 1974 were filled with rising inflation, corruption, and famine, as well as growing discontent by many of the organized urban groups and unions. It was perceived that the droughts and famines within the army and the public were intentional, and that civil freedoms were increasingly disappearing. Mutiny in the army branch of the military began on January 12, 1974, and was followed by several provincial takeovers in February. In early June, a group of about 120 military officers formed a group known as the Derg (committee) who represented the military and worked behind closed doors to gain power within military. Although they claimed allegiance to the emperor, they began arresting aristocracy and parliament members who were associated with the old order. This group effectively removed Selassie's means of governing, as they had complete military control.

The emperor's estate and palace were nationalized and in August, Selassie was directly accused of covering up famine of the early 1970's which killed hundreds of thousands of people. On September 12th, he was formally deposed and arrested and power was given to the Derg, formally renamed the Provisional Military Administrative Council.

In August 1975, His Imperial Majesty Haile Selassie died under questionable circumstances under house arrest,. His early legacy of Ethiopian pride and sovereignty, had transformed itself to a major struggle of the old versus the new orders. The old order was effectively destroyed by 1977, and the Derg began its new agenda of socialism in the Ethiopian government.

A ceremony packed with tradition, color & emotion, Haile Selassie's coffin was carried to a tomb in the city's Orthodox Cathedral, where the emperor will now lie beside his wife.The remains of the Ethiopian ruler, who is believed to have been murdered by followers of his Marxist successor Colonel Mengistu.Veterans of the 1930s struggle against Italian occupation grieve in front of the emperor's casket.

Haile Selassie's soldiers carry the coffin in procession from the church where the remains have been kept since their discovery.

Women wove cloth with the Lion of Judah to remember the King. 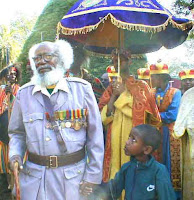 A veteran of the Italo-Ethiopian War, wearing his medals, renders his Emperor homage by bringing his grandson to the funeral. The look on his grandson's face says it all.

The Imperial Family watch the ceremonies at Maskal Square. 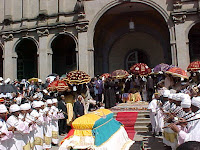 Roaring the chants of St. Yared. The crowd sways acompanied by booming eclesiastic drums and silver cystrums, in a final service over the remains of the Emperor. 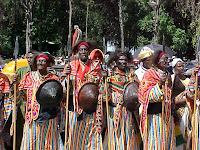 More War Veterans stand at attention in their warrior attire, as they Salute the King.