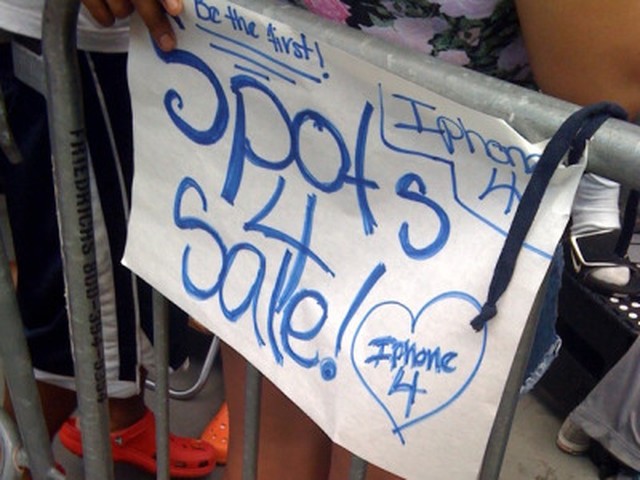 The new Apple iPhone 4th generation is the most highly anticiapted phone on the market as of date. It was released this June 2010. There were crowds of people all over waiting in rediculous lines just to be the first to have this new high tech gadget. It is said to have features that no other phone has. What Apple likes to call "Face Time" Which is the ability to have video confrence call right from the phone.iPhone 4 makes everything a reality. With just a tap, you can wave hello to your kids, share a smile from across the globe. iPhone 4 has two cameras: One on the front, which focuses on you. And one on the back, which focuses on everything else. FaceTime lets you switch back and forth between them at any time during a video call .

It also features The Retina display which is the sharpest, most vibrant, highest-resolution phone screen ever, with four times the pixel count of previous iPhone models. In fact, the pixel density is so high that the human eye is unable to distinguish individual pixels. Which makes text amazingly crisp and images stunningly sharp.


iPhone 4 introduces a whole new way of multitasking. Now you can run your favorite third-party apps and switch between them instantly without slowing down the performance of the foreground app or draining the battery unnecessarily.

With the new iPhone you can now Shoot your own movies in high definition. Capture impressive video even in low-light settings, thanks to the advanced backside illumination sensor and built-in LED light. Then edit and create your own mini-masterpiece right on iPhone 4 using the new iMovie app with Apple-designed themes, titles, and transitions.

I will admit the new design ,and amazing features that the iPhone comes with are incredible. Yet, I dont know if im to the point of camping out over night just for a shot at being the first to have one. The lengths that people went through to have the phone was shocking. I mean stacks on top of stacks of people. Honestly im a simple person as long as my phone calls & texts im cool. Though I would love to get my hands on the new iPhone.
Some people were even bold enough to stand in line, and sell there spots to other hopeful consumers. There wasnt even a guarantee to get one either. Apple was smart enough to release only a few thousand. Leaving people aching to have one.

For the lucky few that were able to snatch one congrads. Apple will probably be releasing a far greater version of the 4G pretty soon. It will have many more features , it will cost more & you will run out to buy it because Apple says so. Lol just my opinion.

Am I not telling the truth?