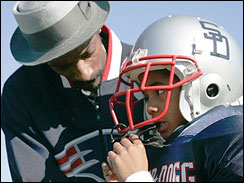 Snoop Dogg’s effort to hinder teenage crime with his Young Football League founded in California in 2004 has expanded to Chicago "The Windy City". Last Sunday he announced 8 new teams in Chicago, Illinois, where Haamid Wadood, Commissioner of the League, announced the next season plans.


This is a great way for young men to get involved with other young men in a positive way. It gives a feel of family structre , discipline , where they would probably look to get that elesewhere in the streets. This is a good look. More activities such as these need to be all over the world. Way to go Snoop !