Dj Quik The Book Of David 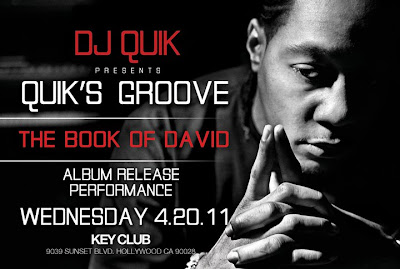 DJ Quik is finally going to release "The Book Of David" . He hasnt dropped an album in over 5 years. This album his highly anticipated.Hip-Hop icon and platinum recording artist DJ Quik is back. Yes we said it he's back. This album is a must have if you are a fan of West Coast Hip Hop. The Compton, California native returns with his eighth solo album on April 20th with “The Book Of David”. Though David is his birth-name, calling this album "The Book Of David" is genious.

Quik mixes his legendary beat crafting with his well known gangsta lyrics, “The Book Of David” is a raw representation of Quik as both an evolved recording artist and the mind of the man behind the music, David Blake. The album is entirely produced by DJ Quik and feature cameos from Bun B, Ice Cube, Kurupt, Dwele, Suga Free, Jon B, Bizzy Bone and many others.

DJ Quik will also be doing an album release performance live on 4-20-11 at the Key Club in Hollywood, CA . Be sure to get your tickets early if you plan on making this event.
Posted by Hip Hop Swagga at 9:06 AM