Diddy was involved in a serious car accident earlier this week in Los Angeles, California. In front of the Beverly Hills Hotel .

According to TMZ, a car turned left in front of his SUV and Diddy's driver t-boned the other car. Officers claim that everyone involved in the incident - Diddy, his driver and the other driver - complained of pain.

An ambulance was called to the scene, but law enforcement agents say that no one was taken to the hospital. It's also unclear how seriously all parties were injured in the crash. Here is a pic of his car. 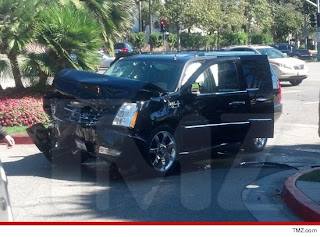