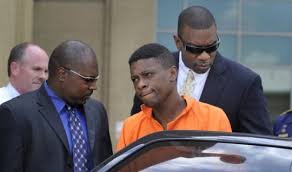 Lil Boosie daughter tells the world that her daddy is home .

It has been confirmed the Artist known as Lil Boosie has been released from Louisiana State Penitentiary. 31 year old Torrence Hatch was been locked up since 2009 on drug charges. During his stay he was busted while attempting to smuggle drugs into the prison . So a judge slammed him with 8 years to his original 4 year sentence.

But it seems that somehow he caught a break .Yes Yes you heard right Lil Boosie is home.