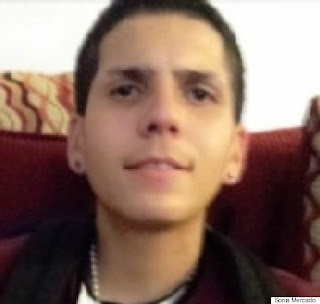 Hector Morejon, was violently killed on April 23,2015 by the LBPD. After officers responded to a simple tress passing and vandalism call that Thursday that took an unnecessary turn for the worst.

19 year old Hector was the youngest of five children, and made a desperate plea for help after he was shot by a Long Beach, California, police officer, who allegedly thought the 19-year-old was in possession of a firearm.

His final words to his mother came, the attorney alleges, after police denied Lucia Morejon (Mother Of Hector) access to her son before the ambulance drove away.

"He was reaching for her -- reaching out to her for help," lawyer Sonia Mercado told The Huffington Post. "She identified herself as his mother, expecting to ride with him to the hospital, but they refused to let her in."
The chilling words -- "Mommy, Mommy, please come, please come" -- are the same words Lucia Morejon hears when she closes her eyes everyday, after her son's death, Mercado said.
According to the Long Beach Police Department, the shooting occurred after officers were dispatched to a vacant residence in the 1100 block of Hoffman Avenue to simply investigate a report of trespassing and vandalism.
When the officers arrived, they allegedly looked through an open window and saw Hector Morejon standing inside the residence.
"The officer observed [Morejon] turn towards him, while on bending his knees, and extending his arm out as if pointing an object which the officer perceived was a gun," Long Beach police said in a press release.
Hector, who was in critical condition when he was admitted to a local hospital, was pronounced dead shortly after arrival. According to police, "no weapon was recovered from the scene.
Hectors Funeral was held today on May 27th 2015 at All Souls Cemetery in Long Beach, California. The Officer involved is currently still working , and has been granted office duty. As we know the family has yet to receive answers. Nor have the officers involved been held accountable for murdering Hector Morejon. THIS MUST STOP !
Rest In Peace Hector, Our deepest sympathy goes out to the family and friends of Hector. May he R.I.P.
......HipHopSwagga